After running the command, you will see some output like shown in the image. 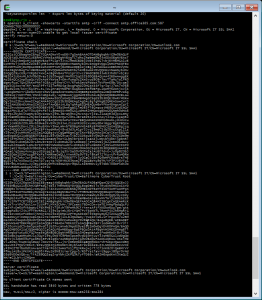 I copied the both parts between BEGIN CERTIFICATE and END CERTIFICATE to two different text editore files and saved them with the extension .cer. Next I was able to upload both certificates to the certificate trust list in ClearPass and configure the message server with StartTLS Connection Security