Policy-based routing in a nutshell 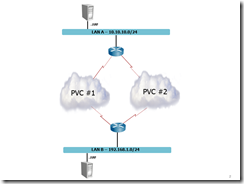 I configured two routers and connected each router to two PVC’s on the same ATM interface. I configured one subnet per location. All normal traffic is router through PVC #1, but all traffic to or from the servers in the picture should be routed to PVC #2.

The top router has SVI VLAN 1 configured to connected to the inside LAN. The first step in configuring policy-based routing is defining which traffic should be routed over PVC #2. I configured the following access-list.

Next you need to configure a route-map with a “match” statement and configure the appropriate “set” conditions.

The last step is applying the configured route-map to the correct interface. As stated before, we are using SVI VLAN 1.

As you can see, configuring policy-based routing is very simple, and yet very powerful.

One issue is when testing policy-based routing from the router. By default, locally-generated packets are not inspected by outgoing access-lists. To enable local packets from being re-entered into the router, you should issue the ip local policy route-map <rm-name>.