The usage of Pocket PCs (PDAs) becomes more and more a default feature for business. The last months I have installed quit some Windows ISA 2006 servers for Reverse Proxy purposes. I have installed them normally for webmail only, but lately I have added the Microsoft Active Sync feature.

The Pocket PCs connect to the organization via UMTS, GPRS, USB with laptop or whatever with an internet connection. Today I had the same job on the schedule: Enable Active Sync for Pocket PCs.

I thought by myself: EASY JOB, but NOT. After configuring the ISA reverse proxy I used a Pocket PC emulator to test the Active Sync features. I received the following error message when synchronizing: 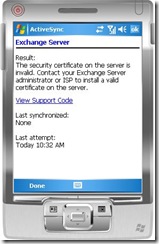 I found this a strange message, because clients use the same URL as the Pocket PC for accessing their webmail and they never receive an error message for an untrusted certificate.

The used certificated is issued by Equifax Secure Global eBusiness CA-1. This is a common and one of the better CA’s.

I had to dig deeper into the problem. I tried to install the certificate on the Pocket PC, but no luck. I searched the internet and found a tool called Microsoft Exchange Server Disable Certificate Verification. You can find an executable here, which can be used when using the Pocket PC in conjunction with a PC through USB. I also found a similar tool to install on the pocket PC, this is called AS_Cert_OFF.cab. The tool wasn’t the solution to the problem, so I had to dig deeper.

I was thinking way to complex, the problem was fixed by requesting a new certificate. The used certificate didn’t support Pocket PC. Comparing the different SSL certificates on QuickSSL.com I noticed I had to use a QuickSSL Premium certificate. This certificate supports popular mobile devices and smartphones.

After adding the key to the registry, all Pocket PC’s synchronized perfectly.