I noticed that ISA 2004 puts a “Default ISA policy” with the highest priority in the remote access policies. The rule blocks all RADIUS requests, so I had to manually remove the access policy. After the removal everything was working fine again.

I cannot find anything specific about this problem on the internet, so maybe someone experienced this before and can provide me with an answer to disable this behavior. 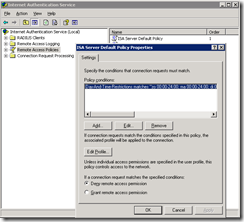