The session about firewall design and deployment didn’t reveal a lot of new things about the Cisco ASA appliance or FWSM module. The only new thing for me was the possibility to configure a redundant interface for a Cisco ASA appliance. The screen shot below shows the cabling scheme for an implementation with and without interface redundancy. 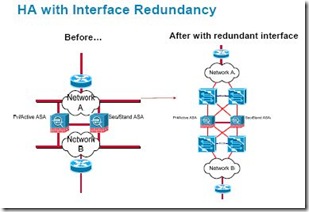 Important here is to notice that this configuration doesn’t provide load-balancing across two links. The configuration is only for link redundancy.

To configure interface redundancy you can use the configuration snippet shown below.

The configuration of interface redundancy has some caveats as listed below:

During the session the different modes for the firewalls have been discussed. Normally we only use the Routed Mode, but there are more modes like described below:

Especially not supporting VPN services (site-to-site VPN, remote access VPN and SSL VPN) is mostly the most used reason for not using multiple context implementation for the firewall.

This site uses Akismet to reduce spam. Learn how your comment data is processed.